Failure is a Gift

Failure. Ouch! That word hurts us where we are most vulnerable. Our first reactions to failure often come with thoughts that say we aren’t good enough or we’re a screw up. We experience emotions like embarrassment, disappointment, anxiety, frustration, fear, and uncertainty. The thing is, that failure is a part of life. It’s something that everyone experiences. Failure doesn’t have to be a devastating blow and it should never keep you down. The fear of failure should never hold you hostage from trying the things that you want to do or accomplish. Although, if you think you want to hand feed a bear and you are afraid you might get eaten, then that is an entirely different thing. Always use common sense for your safety. There is a saying that I love, everything you want is on the other side of fear. So, stop fearing failure, or is it that you are actually afraid that you might actually succeed?

Failure isn’t something that should be feared or ashamed of. Failure is actually a gift. Failure teaches us about ourselves and helps us to dig deeper to unveil our strengths and tenacity. Failure has many lessons to teach and many gifts to give.

“Dude, suckin’ at something is the first step to being sorta good at something.” – Jake, Adventure Time

Failure is a teacher.  It forces us to stop and review our actions and, or what was it that went wrong? How can I improve? What choices could I have made differently? Failure gives us an opportunity for review, reflection, and growth. Sometimes we fail over and over, but each time we get better and better. It teaches us patience, faith, perseverance, and belief in ourselves.

Failure is a guide. There are times in our lives when what we have been doing is no longer working. We come to a crossroads and need to make decisions that could reshape our lives. Do we work on this and make it better or is it time to try something different? Perhaps a road block has popped up because your life map says it’s time to switch roads to reach your destiny. Failure isn’t the end, it may just be a road sign leading you in a different and better direction.

Failure reveals who we are. When you fail do you crawl into a hole and cry in shame? Do you give up and roll over? Or, do you become determined and find the courage to try again? Failure shows us how badly we want something. Do you want this enough to keep trying, or are you going to give up and walk away? It reveals how strong you are, your level of determination, and your depth of belief in yourself. Failure shows you what you’re made of and allows you to take a stand and make some changes.

Did you know that Michael Jordan was cut from his high school basketball team? Walt Disney was once fired from a newspaper for a lack of ideas and his first cartoon production company went bankrupt. Lucille Ball was told that she had no talent and should leave Murray Anderson’s drama school. Dustin Hoffman worked as a janitor and an attendant in a mental ward because he failed in his first attempt as an actor in New York. Did you know Bob Dylan was booed off the stage at his high school talent show? Dr. Seuss’s wanted to burn the manuscript of his first book after 27 publishers rejected it. Steven Spielberg wasn’t accepted to UCLA film school because of average grades. Steve Jobs was fired from Apple at thirty years old and Oprah Winfrey was once told she wasn’t fit for television and was fired as a news anchor.

These people had big dreams and never let failure be the end of their story. They dug deep and believed in themselves and their dreams.  They learned from their failures and tried again, over and over again. Failure isn’t the end, it’s the beginning of something beautiful.

“If you want to increase your success rate, double your failure rate.” – Thomas J. Watson

PrevPreviousMedical Missions
NextLiving Freely: The Fruit of Faith and ReasonNext

Ole Foundation, a Catalyst for Change for communities in need

Since 2015, Ole Group Inc. has been dedicated to lend a helping hand to communities, children, and families in need all around the globe, through 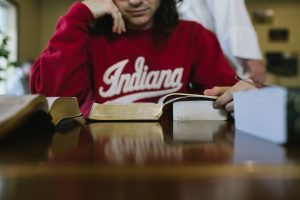 Living Freely: The Fruit of Faith and Reason

We can agree on this: Everyone wants to know. Exalted things. Everyday things. Even trivial things. Whether it’s getting to the heart of the matter